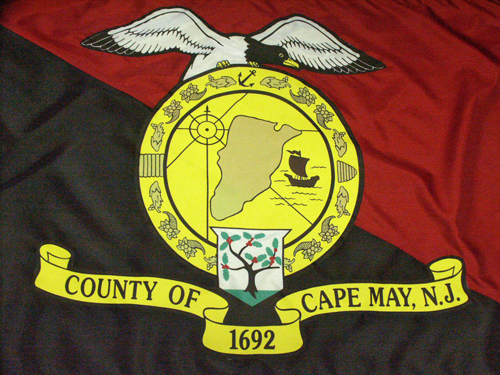 The flag is made up of a holly tree, adopted by resolution as the official tree of Cape May County, at the base of the county Seal; a gull perched above and on top of the seal; and the county incorporation date of 1692. Colors of the flag are red, navy blue; gull and holly tree background white; with the rest being done in gold and contrasting colors.

The minutes reflect that on October 1, 1957, the flag had been purchased and was now on display at the front of the Freeholders’ meeting room. As reported in 1969, the county flag had been loaned on occasion to various civic organizations and schools for display.

Today, the flag is flown along with the national flag at most county buildings and is on display in the Commissioners’ Offices, meeting rooms and the offices of the county department heads.
Interactive Map
Employment Opportunities
Notify Me™
Emergency Management
Form Center
Facilities & Reservations
Explore Us
Bid Postings