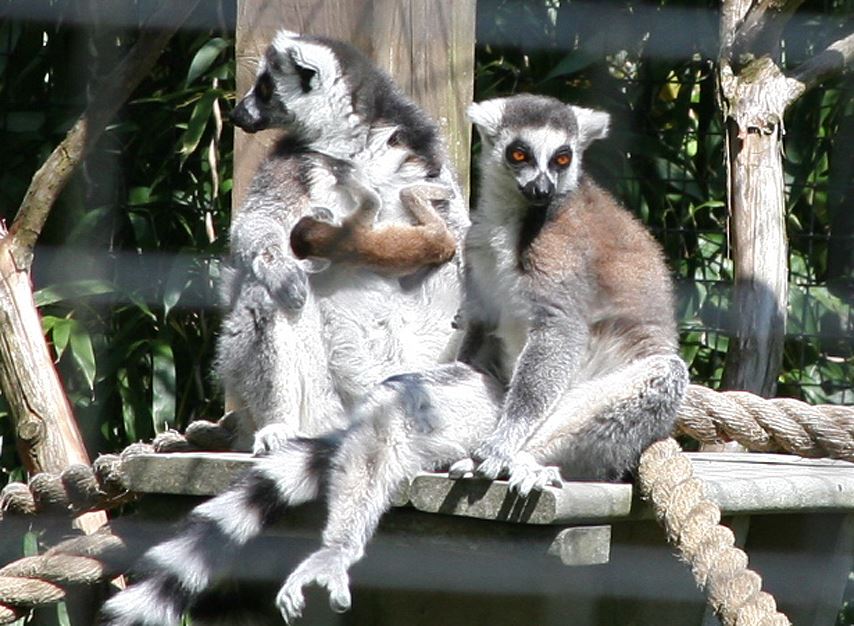 Captive/Wild Lifespan: up to 18 years in the wild and 30+ in captivity.

Gestation: One sometimes 2 are born after 135 day gestation. Once a year is typical with mid March through May being prime breeding time.

Adaptations: Troops number from 2-30 male and female individuals with one female presiding over all. RTL average 5 to 7 pounds with a tail up to 22 inches long. Unlike other Lemur species they spend 70% of their time on the ground but are just as comfortable in the trees. Both front and back feet have a thumb like appendage

Conservation: Habitat loss due to controlled burns to create grazing fields for domestic cattle dwindle their numbers. The largest wild population resides on what is considered sacred land and not to be touched. There are a couple of smaller population protected on privately owned preserves. Its estimated there are around 2,500 Ring tailed Lemurs in captivity and believed to be the largest number of primates in captivity.

Did you know: Zaboomafoo is often mistaken for a Ring Tailed Lemur but in fact is a Sifaka Lemur.

Here at the CMC Zoo: We currently have a troop of 5 Lemurs. "Lily" is the dominant female and the leader of the troop. She had 7 offspring, two of which are still at the zoo. "Bean" was the first born on March 22, 2008. "Tres" was the third offspring, born on May 5, 2010. Our fourth lemur is an unrelated male named "Darwin." He was born at the Lemur Conservation Center on April 4, 2015. Felena joined us in 2018 and was born in May of 2014. Ring-tailed lemurs are an endangered species, and the breeding programs in zoos are important for their survival. The lemurs love to bask in the sun in their "sun-worshiping" pose. They also enjoy training sessions where keepers get their weights and the lemurs practice going into a crate.